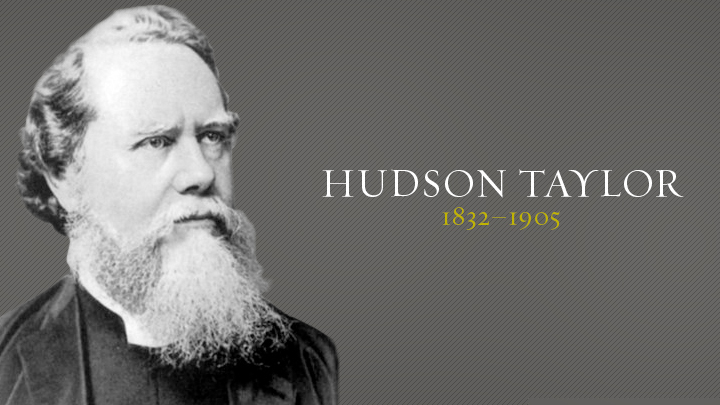 Dr James Hudson Taylor was a British Protestant Christian missionary to China and founder of the China Inland Mission. Taylor spent 51 years in China. At the time of his death in 1905 he had established 205 mission stations throughout mainly inland China that were staffed by over 800 missionaries. By this time, 125,000 Chinese people had come to faith in the Lord Jesus Christ through the ministries of the China Inland Mission. Dr Taylor’s first wife was Maria Dyer who died at the age of 33 from cholera. He remarried Jennie Faulding a year later. Jennie died in 1904 at the age of 61, just 12 months prior to Dr Taylor.

Daughter of one of the first missionaries to China, she was orphaned at the age of 10. She was a missionary to China when she married Hudson Taylor, January 20, 1858. They had seven children: Grace, Herbert Hudson, Frederick Howard (who would later co-author Hudson’s biography), Samuel, Maria, Charles Edward, and Noel. Being fluent in the Ningpo dialect, she helped Hudson with translation work. They had been married for 12 1/2 years when at 33 yrs. of age, Maria died of cholera in 1870. She was a “tower of strength” and a comfort to her husband. In her own words, she was “more intimately acquainted than anyone else can be with his trials, his temptations, his conflicts, his failures and failings, and his conquests.”

Another CIM missionary, she became the second wife of Hudson Taylor in 1871. They had two children (a son, Ernest, born in 1875 and a daughter, Amy, born in 1876), plus the four from his previous marriage and an adopted daughter. Jennie cared for her husband through injury and illness, edited the periodical China’s Millions for the China Inland Mission, had a special ministry among the women. In her later years she travelled with Hudson Taylor, speaking, writing, and organizing the work of the Mission. She died in 1904, preceding Hudson Taylor who died in 1905.

Much could be and has been written about the life and experiences of amazing overcomer Dr James Hudson Taylor. He faced so many seemingly insurmountable odds in his missionary efforts to reach the people of inland China. He loved the Chinese people and sought his whole adult life to bring them into relationship with Christ. His commitment to China and his love for the Chinese people was succinctly summed up a few moments following his death in China. A Chinese evangelist and his wife entered the room and said “Dear and Venerable Pastor, we love you. We are your children. You opened for us the road, the road to heaven. You loved us and prayed for us long years.”

As for the man’s faith and his confidence in prayer, no account offers a more vibrant insight than the following:

In the year 1854 a sailing vessel was becalmed in the vicinity of New Guinea. Seeing the distressed look on the captain’s face as he peered intently into the sea, a young Englishman inquired as to the cause of his anxiety. This was the reply: “A four-knot current is carrying us swiftly toward some sunken reefs over there. Our fate seems to be sealed.” On the shores of the island, cannibals were rushing about and lighting fires in great glee. Presently the captain spoke again: “We have done everything that can be done.” “No,” responded the young man, “there is one thing we haven’t done. Four of us on board are Christians. Let each of us retire to his cabin and in agreed prayer ask the Lord to give us a breeze immediately.” This was agreed upon and done. After a few minutes of earnest intercession, the young man came up on deck confident that the petition had been granted. Finding the first officer, a godless man, in charge, he requested him to let down the corners of the mainsail. “What would be the good of that?” he asked. The young man told him that he and three others had been asking God to send a wind, that it was coming immediately and that there was not a minute to lose, since they were so near the reefs. With a look of contempt, the officer replied with an oath: “Nonsense! You can’t pray up a wind.” Noticing a few moments later that the topmost sail was beginning to tremble, he said: “That is only a cat’s-paw — a mere puff of wind.” “Never mind what you think,” cried the young man. “Let down the mainsail quickly.”

This he was not slow to do. Hearing the heavy tread of the men on deck, the captain came up from his cabin and saw that the breeze had indeed come. In a few minutes they were sailing away from the dangerous reefs, much to the disappointment of the native cannibals on the beach.

Writing of this and similar experiences, the young man said: “Thus God encouraged me, ere landing on China’s shores, to bring every variety of need to Him in prayer, and to expect that He would honor the name of the Lord Jesus and give the help which each emergency required.”

So we have been introduced to a remarkable man, J. Hudson Taylor, and to the text, John 14:13, which was woven into the fabric of his life and into the texture of his stupendous achievements: “And whatsoever ye shall ask in my name, that will I do, that the Father may be glorified in the Son.”