Posted on May 28, 2019 Posted By: Neil DaviesCategories: Pastor's Blog 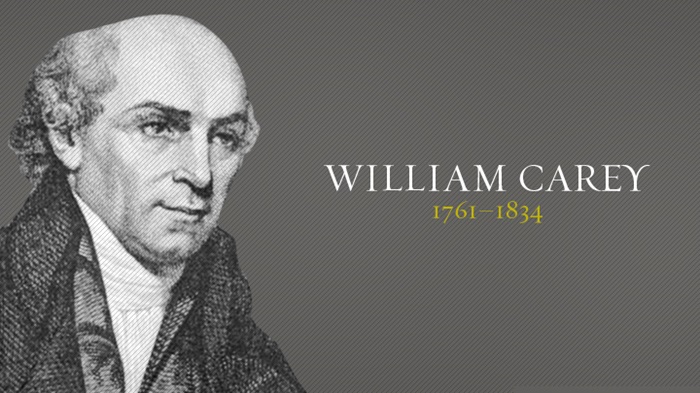 I want to introduce you this week to an amazing overcomer – William Carey, an English cobbler, who overcame all sorts of obstacles in his desire to bring the gospel to the heathen in foreign lands. By the time of his death he had become known as the Father of modern Protestant missions. He is famously known for his sermon, preached in 1792 at the organization of a missionary society “Expect great things from God; attempt great things for God.”

At a meeting of Baptist leaders in the late 1700s, a newly ordained minister stood to argue for the value of overseas missions. He was abruptly interrupted by an older minister who said, “Young man, sit down! You are an enthusiast. When God pleases to convert the heathen, he’ll do it without consulting you or me.”

That such an attitude is inconceivable today is largely due to the subsequent efforts of that young man whose name was William Carey.

Carey was raised in the obscure, rural village of Paulerpury, in the middle of England. He was an apprentice in a local cobbler’s shop. Carey was a nominal Anglican when he began work in the cobbler’s shop but soon after was converted. He enthusiastically took up the Christian faith, and though little educated, the young convert borrowed a Greek grammar book and proceeded to teach himself New Testament Greek.

When the cobbler for whom he worked died, he took up shoemaking in nearby Hackleton, where he met and married Dorothy Plackett, who soon gave birth to a daughter. But the apprentice cobbler’s life was hard—the child died at age 2—and his pay was insufficient. Carey’s family sunk into poverty and stayed there even after he took over the business.

Consistent with the overcomer he was, he wrote later “I can plod, I can persevere to any definite pursuit.” All the while, he continued his language studies, adding Hebrew and Latin, and became a preacher with the Particular Baptists. He also continued pursuing his lifelong interest in international affairs, especially the religious life of other cultures.

Carey was impressed with early Moravian missionaries and became increasingly dismayed at his fellow Protestants’ lack of interest in missionary pursuit. In response to this apathy towards mission, he penned the article An Enquiry into the Obligations of Christians to Use Means for the Conversion of the Heathens. He argued that Jesus’ Great Commission applied to all Christians of all times, and he castigated fellow believers of his day for ignoring it: “Multitudes sit at ease and give themselves no concern about the far greater part of their fellow sinners, who to this day, are lost in ignorance and idolatry.” But can we say it is any different today? Many church going Christians live year upon year engrossed in their own little world without ever once mentioning their faith to another soul or caring about the eternal destiny of even their immediate neighbours.

Carey didn’t stop there: in 1792 he organized a missionary society, and at its inaugural meeting preached a sermon with the call, “Expect great things from God; attempt great things for God!” Within a year, Carey, John Thomas (a former surgeon), and Carey’s family (which now included three boys, and another child on the way) were on a ship headed for India.

Thomas and Carey had grossly underestimated what it would cost to live in India, and Carey’s early years there were miserable. When Thomas deserted the enterprise, Carey was forced to move his family repeatedly as he sought employment that could sustain them. Illness racked the family, and loneliness and regret set it: “I am in a strange land,” he wrote, “no Christian friend, a large family, and nothing to supply their wants.” But he also retained hope: “Well, I have God, and his word is sure.”

He learned Bengali with the help of a pundit, and in a few weeks began translating the Bible into Bengali and preaching to small gatherings. When Carey himself contracted malaria, and then his 5-year-old Peter died of dysentery, it became too much for his wife, Dorothy, whose mental health deteriorated rapidly. She suffered delusions, accusing Carey of adultery and threatening him with a knife. She eventually had to be confined to a room and physically restrained. “This is indeed the valley of the shadow of death to me,” Carey wrote, though characteristically added, “But I rejoice that I am here notwithstanding; and God is here.”

In October 1799, things finally turned. He was invited to locate in a Danish settlement in Serampore, near Calcutta. He was now under the protection of the Danes, who permitted him to preach legally (in the British-controlled areas of India, all of Carey’s missionary work had been illegal). Carey was joined by William Ward, a printer, and Joshua and Hanna Marshman, teachers. Mission finances increased considerably as Ward began securing government printing contracts, the Marshmans opened schools for children, and Carey began teaching at Fort William College in Calcutta.

In December 1800, after seven years of seemingly fruitless missionary labour, Carey baptized his first convert, Krishna Pal, and two months later, he published his first Bengali New Testament. With this and subsequent editions, Carey and his colleagues laid the foundation for the study of modern Bengali, which up to this time had been an “unsettled dialect.” Carey continued to expect great things; over the next 28 years, he and his pundits translated the entire Bible into India’s major languages: Bengali, Oriya, Marathi, Hindi, Assamese, and Sanskrit and parts of 209 other languages and dialects. He also sought social reform in India, including the abolition of infanticide, widow burning (sati), and assisted suicide. He and the Marshmans founded Serampore College in 1818, a divinity school for Indians, which today offers theological and liberal arts education for some 2,500 students.

By the time Carey died, he had spent 41 years in India without a furlough. His mission could count only some 700 converts in a nation of millions, but he had laid an impressive foundation of Bible translations, education, and social reform. His greatest legacy was in the worldwide missionary movement of the nineteenth century that he inspired. Missionaries like Adoniram Judson, Hudson Taylor, and David Livingstone, among thousands of others, were impressed not only by Carey’s example, but by his words “Expect great things from God; attempt great things for God.” The history of nineteenth-century Protestant missions is in many ways an extended commentary on the life of William Carey

William Carey – an amazing overcomer indeed The above was largely informed from an article in Christianity Today titled William Carey https://www.christianitytoday.com/history/people/missionaries/william-carey.html