Posted on May 15, 2019 Posted By: Neil DaviesCategories: Pastor's Blog 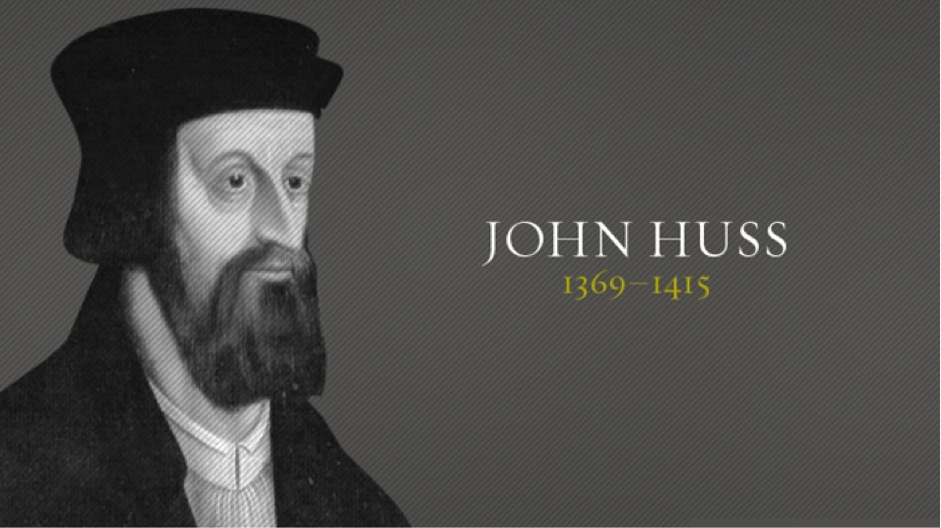 God grant us more men like Jan Huss today who will stand against the floodtide of sin and popular opinion in the backsliding modern church and will stand again on the scriptures are our only rule of faith and practice.

Jan Huss (pronounced yun hoos) was born in the Bohemian countryside (southern Czech Republic) to parents who were peasant farmers. To escape poverty, Huss trained for the priesthood: He earned a bachelor’s, master’s, and then finally a doctorate. Along the way he was ordained (in 1401) and became the preacher at Prague’s Bethlehem Chapel (which held 3,000), the most popular church in one of the largest of Europe’s cities, a centre of reform in Bohemia (for example, sermons were preached in Czech, not Latin).

During these years, Huss underwent a change. Though he spent some time with what he called a “foolish sect,” he finally discovered the Bible: “When the Lord gave me knowledge of Scriptures, I discharged that kind of stupidity from my foolish mind.”

Huss was burned at the stake in 1415, fully 100 years before Luther nailed his treatise to the Wittenburg church door. “We’ll cook his goose.” Believe it or not, that phrase originated as a reference to a man whose last name means (in his native language, Czech) “goose” – Jan Huss. He was literally cooked – burned at the stake – but in being cooked he lit a fire of both nationalism and church reform – an overcomer indeed.

The reform-centered writings of John Wycliffe found their way into Bohemia. Studying in the days before the printing press, Hus painstakingly copied Wycliffe’s books for his own use. Like Wycliffe, Hus emphasized personal piety and purity of life. He stressed the role of the Bible as authority in the church, and consequently, he lifted biblical preaching to an important status in church services. Bethlehem Chapel itself was a tangible illustration of Huss’s teachings. On its walls were paintings contrasting the behaviour of the popes and Christ. For example, the pope rode a horse while Christ walked barefoot, and Jesus washed the disciples’ feet while the pope had his feet kissed. Many of the clergy felt-rightly-that their lifestyle was being questioned. But Hus was popular with the masses and with some of the aristocracy, including the queen.

Thrown out of church

The archbishop of Prague told Hus to stop preaching and asked the university to burn Wycliffe’s writings. Hus refused to comply, and the archbishop condemned him. Meanwhile, Hus preached against the sale of indulgences, which were being used to finance the pope’s expedition against the king of Naples. The pope excommunicated Hus and placed Prague under an interdict-roughly meaning that the entire city was excommunicated and could not receive the sacraments. To relieve this situation, Hus left Prague, but he continued to preach in various churches and in the open air. And, like Jesus, “the common people heard him gladly.”

Why was the hierarchy so opposed to Hus? Not only did he denounce the often immoral and extravagant lifestyles of the clergy (including the pope himself), but he also made the bold claim that Christ alone is head of the church. In his book On the Church he defended the authority of the clergy but claimed that God alone can forgive sins. He also claimed that no pope or bishop could establish doctrine contrary to the Bible, nor could any true Christian obey a clergyman’s order if it was plainly wrong.

Hus could only meet with trouble for such teachings. In 1415 he was summoned to the Council of Constance to defend his teachings. In being conducted there he was victim of one of the dirtiest tricks ever played on a Christian. He was promised safe conduct by the Emperor Sigismund. And he had the papal assurance: “Even if he had killed my own brother . . . he must be safe while he is at Constance.” Yet, Hus was arrested soon after he arrived. He was confined in a cell under a Dominican convent. His cell was right next to a sewer system. In effect, the Council had already made up its mind about this rebel Hus. The Council condemned the teachings of Wycliffe, and Hus was condemned for supporting those teachings. Especially under fire was Hus’s statement that when a pope or bishop is in mortal sin he has ceased to be pope or bishop.

A chapel full of gold

Hus, sick and physically wasted by long imprisonment, illness, and lack of sleep, protested his innocence and refused to renounce his alleged errors unless he could be shown otherwise from Scripture. To the council he said, “I would not, for a chapel full of gold, recede from the truth.”

“I will gladly die”

Formally condemned, he was handed over to the secular authorities to be burned at the stake on July 6, 1415. On the way to the place of execution, he passed a churchyard and saw a bonfire of his books. He laughed and told the bystanders not to believe the lies circulated about him. Arriving at the place of execution, he was asked by the empire’s marshal if he would finally retract his views. Hus replied, “God is my witness that the evidence against me is false. I have never thought nor preached except with the one intention of winning men, if possible, from their sins. Today I will gladly die.” The fire was lit. As the flames engulfed him, Huss began to sing in Latin a Christian chant: “Christ, Thou Son of the Living God, have mercy upon me.”

Huss had long been popular with the lay people, and his heroic death only increased his prestige. His followers came out in open rebellion, both against the Catholic church and against the German-dominated empire with which they wanted no part. Despite repeated efforts of popes and rulers to stamp out the movement, it survived as an independent church, known as the Unitas Fratrum or the Unity of the Brethren.

Not about to listen to a “rebel”

The council of Constance had been called to settle the scandalous situation of having two popes, one in Italy, one in France. This “Great Schism” (1378-1417) had to be dealt with. It was dealt with–thanks to the council. Naturally, a council that restored an undivided papacy wasn’t about to acquit a rebel who questioned the authority of the pope. Huss’s goose was indeed cooked.