Posted on May 22, 2019 Posted By: Neil DaviesCategories: Pastor's Blog 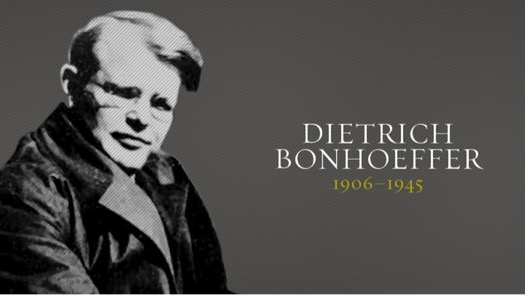 “The time is fulfilled for the German people of Hitler. It is because of Hitler that Christ, God
the helper and redeemer, has become effective among us. … Hitler is the way of the Spirit
and the will of God for the German people to enter the Church of Christ.” So spoke German
pastor Hermann Gruner. Another pastor put it more succinctly: “Christ has come to us
through Adolph Hitler.”

So despondent had been the German people after the defeat of World War I and the subsequent economic depression that the charismatic Hitler appeared to be the nation’s answer to prayer—at least to most Germans. One exception was theologian Dietrich Bonhoeffer, who was determined not only to refute this idea but also to topple Hitler, even if it meant killing him.

From pacifist to co-conspirator

Bonhoeffer was not raised in a particularly radical environment. He was born into an aristocratic family. His mother was daughter of the preacher at the court of Kaiser Wilhelm II, and his father was a prominent neurologist and professor of psychiatry at the University of Berlin.

All eight children were raised in a liberal, nominally religious environment and were encouraged to dabble in great literature and the fine arts. Bonhoeffer’s skill at the piano, in fact, led some in his family to believe he was headed for a career in music. When at age 14, Dietrich announced he intended to become a minister and theologian, the family was not pleased. Bonhoeffer graduated from the University of Berlin in 1927, at age 21, and then spent some months in Spain as an assistant pastor to a German congregation. Then it was back to Germany to write a dissertation, which would grant him the right to a university appointment. He then spent a year in America, at New York’s Union Theological Seminary, before returning to the post of lecturer at the University of Berlin.

During these years, Hitler rose in power, becoming chancellor of Germany in January 1933, and president a year and a half later. Hitler’s anti-Semitic rhetoric and actions intensified—as did his opposition, which included the likes of theologian Karl Barth, pastor Martin Niemoller, and the young Bonhoeffer. Together with other pastors and theologians, they organized the Confessing Church, which announced publicly in its Barmen Declaration (1934) its allegiance first to Jesus Christ: “We repudiate the false teaching that the church can and must recognize yet other happenings and powers, personalities and truths as divine revelation alongside this one Word of God. … “

In the meantime, Bonhoeffer had written The Cost of Discipleship (1937), a call to more faithful and radical obedience to Christ and a severe rebuke of comfortable Christianity: “Cheap grace is preaching forgiveness without requiring repentance, baptism without church discipline, Communion without confession. … Cheap grace is grace without discipleship, grace without the cross, grace without Jesus Christ, living and incarnate.”

During this time, Bonhoeffer was teaching pastors in an underground seminary, Finkenwalde (the government had banned him from teaching openly). But after the seminary was discovered and closed, the Confessing Church became increasingly reluctant to speak out against Hitler, and moral opposition proved increasingly ineffective, so Bonhoeffer began to change his strategy. To this point he had been a pacifist, and he had tried to oppose the Nazis through religious action and moral persuasion.

Now he signed up with the German secret service (to serve as a double agent—while traveling to church conferences over Europe, he was supposed to be collecting information about the places he visited, but he was, instead, trying to help Jews escape Nazi oppression). Bonhoeffer also became a part of a plot to overthrow, and later to assassinate, Hitler.

As his tactics were changing, he had gone to America to become a guest lecturer. But he couldn’t shake a feeling of responsibility for his country. Within months of his arrival, he wrote theologian Reinhold Niebuhr, “I have made a mistake in coming to America. I must live through this difficult period in our national history with the Christian people of Germany. I will have no right to participate in the reconstruction of Christian life in Germany after the war if I do not share the trials of this time with my people.”

Bonhoeffer, though privy to various plots on Hitler’s life, was never at the center of the plans. Eventually his resistance efforts (mainly his role in rescuing Jews) was discovered. On an April afternoon in 1943, two men arrived in a black Mercedes, put Bonhoeffer in the car, and drove him to Tegel prison.

Bonhoeffer spent two years in prison, corresponding with family and friends, pastoring fellow prisoners, and reflecting on the meaning of “Jesus Christ for today.” As the months progressed, be began outlining a new theology, penning enigmatic lines that had been inspired by his reflections on the nature of Christian action in history.

“God lets himself be pushed out of the world on to the cross,” he wrote. “He is weak and powerless in the world, and that is precisely the way, the only way, in which he is with us and helps us. [The Bible] … makes quite clear that Christ helps us, not by virtue of his omnipotence, but by virtue of his weakness and suffering. … The Bible directs man to God’s powerlessness and suffering; only the suffering God can help.”

In another passage, he said, “To be a Christian does not mean to be religious in a particular way, to make something of oneself (a sinner, a penitent, or a saint) on the basis of some method or other, but to be a man—not a type of man, but the man that Christ creates in us. It is not the religious act that makes the Christian, but participation in the sufferings of God in the secular life.”

Eventually, Bonhoeffer was transferred from Tegel to Buchenwald and then to the extermination camp at Flossenbürg. On April 9, 1945, one month before Germany surrendered, he was hanged with six other resisters.

A decade later, a camp doctor who witnessed Bonhoeffer’s hanging described the scene: “The prisoners … were taken from their cells, and the verdicts of court martial read out to them. Through the half-open door in one room of the huts, I saw Pastor Bonhoeffer, before taking off his prison garb, kneeling on the floor praying fervently to his God. I was most deeply moved by the way this lovable man prayed, so devout and so certain that God heard his prayer. At the place of execution, he again said a prayer and then climbed the steps to the gallows, brave and composed. His death ensued in a few seconds. In the almost 50 years that I have worked as a doctor, I have hardly ever seen a man die so entirely submissive to the will of God.”

Bonhoeffer’s prison correspondence was eventually edited and published as Letters and Papers from Prison, which inspired much controversy and the “death of God” movement of the 1960s (though Bonhoeffer’s close friend and chief biographer, Eberhard Bethge, said Bonhoeffer implied no such thing). His Cost of Discipleship, as well as Life Together(about Christian community, based on his teaching at the underground seminary), have remained devotional classics.